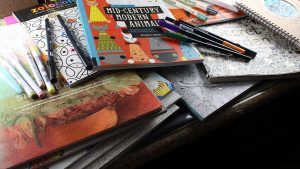 Coloring therapy is becoming increasingly popular among doctors, nurses, and caregivers that are responsible for assisting those with Alzheimer’s disease and dementia. It is a known fact that those individuals that suffer from dementias commonly experience various types of neuropsychiatric symptoms that prove to be detrimental to their overall quality of life. Unfortunately, the pharmacological-based treatments for these particular symptoms are considered to be limited in effectiveness. As a result of this fact, medical professionals have established that there is an immense need for treatments that will aid in the improvement of the neuropsychiatric symptoms. Recent studies indicate that coloring therapy and other forms of art therapy are showing promise in improving the symptoms that diminish the overall quality of life for dementia and Alzheimer’s patients.

The Known Benefits of Coloring Therapy for Alzheimer’s and Dementia Patients
According to research, if a dementia and/or Alzheimer’s patient is appropriately structured; they have the ability to produce beautiful pieces of visual art. While coloring is the most common types of art produced, many other types of visual arts may be produced, too! Not only does coloring therapy effectively engage a patient’s attention, it is known to provide high levels of pleasure, improve social behavior, and increase the self-esteem of a patient. In addition to all of this, patients that have been studied during coloring therapy sessions have displayed marked improvement in the neuropsychiatric symptoms that they experience. As a result of the positive results that have emerged from these comprehensive studies, it has now been determined that all dementia and Alzheimer’s patients be given coloring pages and activities to enhance their overall quality of life.

Common Neuropsychiatric Symptoms
In this first installment of this series, we are placing a large amount of focus on the neuropsychiatric symptoms experienced by those with dementia and/or Alzheimer’s because of the fact that these symptoms have the most profound aspect on the quality of life of the sufferer. Additionally, the symptoms are considered to be the absolute most distressing clinical-based features associated with these devastating cognitive conditions and those that care for them. To date, the following outlines the most prevalent and devastating neuropsychiatric symptoms:

According to medical professionals and those that act as caregivers for those with dementia and/or Alzheimer’s Disease, the previously outlined neuropsychiatric symptoms result in negatively impairing the daily living activities, are very common and tend to worsen and/or increase as time progresses, are known to worsen the patient’s quality of life, result in lengthened hospital stays, and are associated with what many consider to be rapid cognitive decline. Additionally, those that care for patients with these symptoms find that their own physiological and psychological health declines; thus, resulting in caregiver distress. When a caregiver becomes distressed, they could experience high levels of anxiety, immense depression, and their mortality rate may increase. By simply allowing a dementia and/or Alzheimer’s sufferer to engage in coloring therapy and other forms of art therapy, all of this may be reduced and/or possibly avoided.